The Norton Museum of Art's newest special exhibition, The Radical Camera: New York's Photo League, 1936 - 1951, is a formidable survey of the 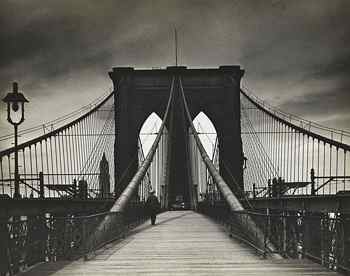 League's history, and its artistic, cultural, social, and political significance. Opening March 14 and on view through June 16, 2013, this striking exhibition includes nearly 150 vintage photographs from Photo League collections at the Columbus Museum of Art, Ohio, and The Jewish Museum in New York City.

The exhibition is organized by Mason Klein, Curator of Fine Arts at The Jewish Museum site folderand Catherine Evans, the William and Sarah Ross Soter Curator of Photography of the Columbus Museum of Art. It premiered in at The Jewish Museum in 2011 to rave reviews. The New York Times called The Radical Camera a "stirring show," and the New York Photo Review hailed it as "nothing short of splendid." The New Yorker named the exhibition one of the top 10 photography exhibitions of 2011. The Norton is the final venue on the exhibition's tour. (right: Alexander Alland (1902-1989, born Sevastopol, Ukraine), Untitled (Brooklyn Bridge), 1938 Gelatin silver print. The Jewish Museum, New York, Purchase: William and Jane Schloss Family Foundation Fund)

The exhibition explores the fascinating blend of aesthetics and social activism at the heart of the Photo League. League members were known for capturing sharply revealing, compelling moments from everyday life. The League focused on New York City and its vibrant streets -- a shoeshine boy, a brass band on a bustling corner, a crowded beach at Coney Island.  Many of the images are beautiful, yet harbor strong social commentary on issues of class, race, and opportunity. The organization's members included some of the most noted photographers of the mid-20th century: W. Eugene Smith, Weegee (Arthur Fellig), Lisette Model, Berenice Abbott and Aaron Siskind, to name a few.

The innovative contributions of the Photo League during its 15-year existence (1936-1951) were significant. As it grew, the League mirrored monumental 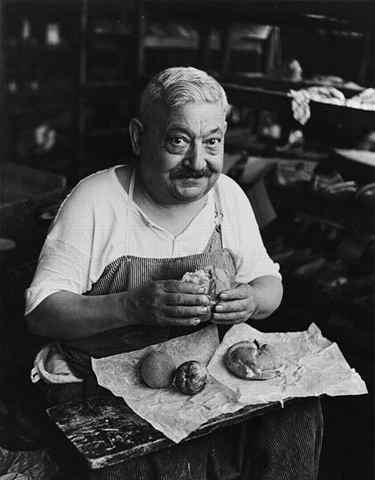 shifts in the world starting with the Depression, through World War II, and ending with the Red Scare. Born of the worker's movement, the Photo League was an organization of young, idealistic, first-generation American photographers, most of them Jewish, who believed in documentary photography as an expressive medium and powerful tool for exposing social problems. It was also a school with teachers such as Sid Grossman, who encouraged students to take their cameras to the streets and discover the meaning of their work as well as their relationship to it. The League had a darkroom for printing, published an acclaimed newsletter called Photo Notes, offered exhibition space, and was a place to socialize. (left: Bernard Cole (1911-1992, born London, England), 1944, Shoemaker's Lunch, Gelatin silver print. The Jewish Museum, New York. Purchase: The Paul Strand Trust for the benefit of Virginia Stevens Gift)

The Photo League helped validate photography as a fine art, presenting student work and guest exhibitions by established photographers such as Eugène Atget, Henri Cartier-Bresson, and Edward Weston, among others. These affecting black and white photographs show life as it was lived mostly on the streets, sidewalks and subways of New York. Joy and playfulness as well as poverty and hardship are in evidence.

In addition to their urban focus, "Leaguers" photographed rural America, and during World War II, took their cameras to Latin America and Europe. The exhibition also addresses the active participation of women who found rare access and recognition at the League. The Radical Camera presents the League within a critical, historical context. Developments in photojournalism were catalyzing a new information era in which photo essays were appearing for the first time in magazines such as Life and Look. As time went on, its social documentary roots evolved toward a more experimental approach, laying the foundation for the next generation of street photographers.

In 1947, the League came under the pall of McCarthyism and was blacklisted for its alleged involvement with the Communist Party.  Ironically, the Photo League had just begun a national campaign to broaden its base as a "Center for American Photography." Despite the support of Ansel Adams, Beaumont and Nancy Newhall, Paul Strand, and many other national figures, this vision of a national photography center could not overcome the Red Scare. As paranoia and fear spread, the Photo League was forced to disband in 1951.

The Radical Camera: New York's Photo League, 1936-1951 has been organized by The Jewish Museum, New York, and the Columbus Museum of Art, Ohio. Major support was provided by the Phillip and Edith Leonian Foundation, the National Endowment for the Arts, and Limited Brands Foundation.

When I began working in the 1940s, few women were doing magazine photography in a field that was almost exclusively male. As I progressed from box camera to Speed Graphic (my first professional camera), and then to a Rolleiflex, I stopped thinking about the mechanics of film speed, f-stops, shutter speed, and began focusing on subject matter that interested me. What interested me so much were ordinary people and their everyday activities. Early on, I had documented children's games and unusual architectural details in my Bronx neighborhood. I decided to expand, to go elsewhere, taking the subway to Harlem, Chinatown, and lower Manhattan, exploring those neighborhoods and looking for photos.
I became a member of the Photo League in 1946. I considered myself a documentary photographer and the League's philosophy of honest photography appealed to me. I also began to understand the power of photos to help improve the social order by showing the conditions under which many people lived and worked. Even after leaving the League the following year, I continued to emphasize visual and social realities in my straightforward photographs.
Beginning with my earliest photos seeing New York City with my feet, and in whatever part of the country I was in, I continued my own walkabout, learning the area, engaging my subject, listening, and respecting their dignity. This continued to be my approach when taking photos. My photographs depicted daily life in America's modern metropolitan centers, including Chicago and Los Angeles as well as New York.
http://www.idawyman.com

I first heard of the Photo League from Lou Stoumen in Puerto Rico in 1942.   I was working for the U.S. Army Signal Corps and Lou was preparing to join Yank Magazine.  When I returned to New York City, I walked up the rickety stairs to League Headquarters and took a beginners class with Johnny Ebstel. I bought a used Rolleicord for a precious $100, and dared to go out on the city streets to photograph the life around me.
Soon the guys began to come back from the war and the heady life of Photo League workshops, exhibits, lectures, photo hunts, and committee assignments intensified.  I took eye-heart-soul opening workshops with Sid Grossman, worked as the paid (!) secretary for a year or so, and worked on the Lewis Hine Committee under Marynn Ausubel.
I photographed in Spanish Harlem, Greenwich Village, midtown Manhattan, at the Hebrew Immigration Aid Society, at an anti-lynching rally in Madison Square Park, at a Jehovah's Witness convention in Yankee Stadium, and on Coney Island. Mostly, I photographed children and reflections of my city -- rough-edged, tender, and very beautiful in its diversity. Some of this work was shown in the major 1949 exhibition, This is the Photo League.
The heartbreaking end of the League coincided with a huge change in my personal life.  I got married and my husband began to go to college and we were out of NY for a while. And then the biggest change: our own family arrived and the joys of our son, and later our daughter, absorbed my time. Prints and negatives were stashed away in boxes and I lost track of all the old friends at the League.
After so many years of being in the shadows, you can imagine my pleasure, at 90+ years of age, to have my photographs out of their boxes and onto walls where they can be seen, thought about, and enjoyed -- and perhaps again take their place in the history of the Photo League.
http://soniahandelmanmeyer.com

Born in New York; Newman attended Brooklyn College, where he studied sculpture with Burgoyne Diller and photography with Walter Rosenblum. Following Rosenblum's suggestion, he joined the Photo League in 1948, taking classes with John Ebstel. The Photo League, founded in 1936, blazed a trail for serious photographers for 15 years, providing a forum for ideas, cheap darkroom space, and the vision of using the art of picture taking to change the world. Newman then attended the Institute of Design, Chicago (1949-52), where, after studying with Harry Callahan and Aaron Siskind, he received one of the first MS degrees in photography (1952).
During this time, Newman won national contests, including one sponsored by American Photography (1950) and another by Time, Inc. (1951). His work appeared in the Always a Young Stranger exhibition at the Museum of Modern Art, New York, and in a one-man show at Roy De Carava's A Photographer's Gallery (1956). Well-known as a photojournalist, Newman has been a major contributor to Sports Illustrated since its inception (1953), as well as to Life, Look, Newsweek, and Smithsonian magazines. In addition, he has been the national president of the American Society of Magazine Photographers, authored or coauthored eight books on photography, and received the Art Director's Gold Medal for Editorial Photography. He continues to live and work in New York.
http://www.brucesilverstein.com/documents.php?id=152

For biographical information about artists mentioned in this article please see America's Distinguished Artists, a national registry of historic artists.

Read more articles and essays concerning this institutional source by visiting the sub-index page for the Norton Museum of Art in Resource Library,

Links to sources of information outside of our web site are provided only as referrals for your further consideration. Please use due diligence in judging the quality of information contained in these and all other web sites. Information from linked sources may be inaccurate or out of date. TFAO neither recommends or endorses these referenced organizations. Although TFAO includes links to other web sites, it takes no responsibility for the content or information contained on those other sites, nor exerts any editorial or other control over them. For more information on evaluating web pages see TFAO's General Resources section in Online Resources for Collectors and Students of Art History.

Visit the Table of Contents for Resource Library for thousands of articles and essays on American art.