David Bumbeck: Figures of the Imagination 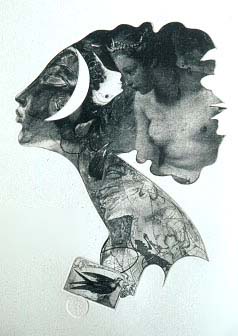 opens Tuesday, Jan. 15, 2002 at the Middlebury College Museum of Art. Known primarily as a printmaker, an art form he has taught at the college since 1968, Bumbeck has for the past 10 years expanded the scope of his work by making sculpture. Eight of his bronze works will be included in the exhibition, along with 12 prints, three working drawings, and a few works fashioned from "found objects," or pre-existing artifacts. (left: David Bumbeck, Artemis, 1995, intaglio print, 21 1/4 x 15 7/8 inches. Courtesy of the artist)

Titled "David Bumbeck: Figures of the Imagination," the exhibition was organized by Emmie Donadio, associate director of the museum. Timed to coincide with Bumbeck's retirement from the College this spring, the exhibition may mark a transition in the artist's career, but it also demonstrates without question the continuing vitality, growth, and development of the creative and imaginative work of this consummate artist.

Trained in the 1960s, Bumbeck holds a bachelor's of fine arts degree from the Rhode Island School of Design and a master's in fine arts from Syracuse University. Coming of age in the heyday of Abstract Expressionism, when improvisation and a love of indefinite surfaces characterized much serious art making, Bumbeck's art has always been meticulous and exacting in its degree of finish. His engravings and etchings are achieved with tools so precise and delicate that they require him to use magnifying glasses as he works the plates. Similarly, his use of photo etching in prints of the 70s and 80s further enhanced his ability to capture appearances exactly. In his most characteristic printed works, Bumbeck drew upon a wide range of images from past art, arranging them in complex compositions that resembled collages. A notable series of artist portraits of the 1980s combined images of the artists themselves with quotations drawn from their most recognizable imagery. 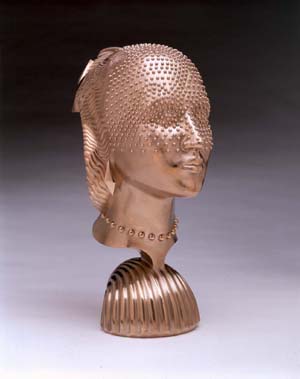 Throughout his career Bumbeck has been passionately engaged in the study of earlier art and artists, and among his more than 1,100 former students are a number of well known and respected artists who have expressed their gratitude to him for imparting this passion. Bumbeck's art is primarily figurative, with the nude female figure a particular focus. Enamored equally of artists like Picasso, de Chirico, and Joseph Cornell, Bumbeck's sensibility is both enigmatic and mysterious. He is likely to quote de Chirico's "What shall I love if not enigma?" when asked about the subject matter of his own works. (left: David Bumbeck, Veiled Horizon, 2000-2001, bronze, 15 1/2 x 12 x 8 inches. Courtesy of the artist)

The artist's recent sculptures show appreciation for Egyptian, Greek, and Renaissance imagery, but they also put a new spin on aspects of African art, Currier and Ives, and a figure derived from an 18th-century Maltese painting. One need not know the specific sources of his imagery to appreciate this artist's prolific imagination, but one cannot fail to be impressed by his ability to translate his inspirations and enthusiasms into the assertions of an independent sensibility.

In addition to his teaching at the College, Bumbeck was director of the Christian A. Johnson Memorial Gallery at the College from 1973 until 1985, and he has played a strategic role in the growth and development of the College's art collection. He has exhibited widely in this country and abroad, with solo exhibitions at Dartmouth College; the University of Northern Arizona, Flagstaff; The Mary Ryan Gallery, New York; and the Everson Museum, Syracuse. Bumbeck's works are included in many important print collections, including those of the Brooklyn Museum of Art, the Library of Congress, the New York Public Library, the Metropolitan Museum of Art, the Carnegie Museum of Art, and the Boston Public Library, as well as the College's. Listed in "Who's Who in American Art," Bumbeck was named Academician of the National Academy of Design in 1992.

"David Bumbeck: Figures of the Imagination" will remain on view at the Museum through Sunday, April 7, 2002.