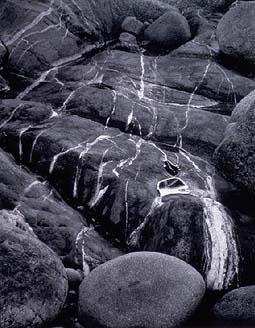 "Paul Caponigro: New England Days" celebrates Caponigro's work in New England, from early images of his native Massachusetts taken during the late 1950s to luminous still lifes photographed in 1999 at his home in Cushing, Maine. The 75 gelatin silver prints that comprise the exhibition include images from Maine to Connecticut, then on to Massachusetts and New Hampshire, reflecting the light, stillness, and thinly-veiled animation of the land, sea, and mind. Paul Caponigro. New England Days will be on view at the Portland Museum of Art from June 8 through September 8, 2002. (left: Paul Caponigro, b. 1932, Quartz Veins in Granite, Nahant, Massachusetts, 1959, gelatin silver print, 12 3/8 x 9 11/16 inches)

In photography and in music, great beauty demands discipline, but it is never a product of discipline. It is no wonder, then, that Paul Caponigro was caught between these two arts as a young man. He began to study piano at the age of 12 and taught himself the basics of photography at about the same time. He learned more about the techniques of photography from working with a variety of commercial photographers -- first lingering around a portrait studio while in high school and later during two years in the United States Army.

While stationed in San Francisco, he met Benjamin Chin, a civilian photographer who worked on the base and introduced him to more advanced photographic techniques as well as the luminaries of West Coast photography, including Ansel Adams and Imogen Cunningham. A short while later, Caponigro was transferred to Arizona, where he perfected his craft on the sun-baked sands of the Yuma Desert. After leaving the army and joining the photographic community in San Francisco, Caponigro discovered that while his photographs had developed technically, they were still only pale reflections of what he saw. He returned East to develop his own vision and began study with Minor White. Through the next few years, Caponigro developed his ideas and approaches to photography and set the course for his life's work, with his native New England as inspiration as well as subject.

Even after moving to New Mexico in 1973, and throughout his celebrated travels to England, Ireland, France, and Japan, New England has been a constant touchstone in Paul Caponigro's life and art. Caponigro's New England does not reflect the harsh, Puritan archetype of history and legend, but rather the natural wonder of discovering pure beauty in a familiar and well-traveled place.