Decorative Arts Gallery at the Washington County Museum of Fine Arts in Hagerstown through January 4, 2004. The works, on loan from the collection of Dale and Rosie Horst of Newton, Kansas, will put visitors in a cheerful mood throughout the season. (right: Frederick Stuart Church (1842-1924), The Snow Witches Daughter, Harper's Bazaar, December 23, 1882)

The son of a prominent lawyer and political figure, Church was born in Grand Rapids, Michigan where he attended school until age 13. After serving in the Civil War, he took lessons in drawing from Walter Shirlaw at the Chicago Academy of Design. In 1870, Church went to New York City to continue his artistic career and remained in the city for the rest of his life. One of his patrons was the banker, Grant B. Schley, who even built a studio for Church at his estate "Froh Helm" in Far Hills, New Jersey. Other patrons included John Gellatly, William T. Evans and Charles L. Freer, founder of the Freer Gallery in Washington, D.C.

The animals depicted in many of Church's works often display human characteristics and seem on very friendly terms with their human companions. Church made frequent trips to Central Park Zoo and Barnum & Bailey's headquarters to study and make sketches of animals. He became familiar with their different expressions as a means of conveying their various feelings and moods.

lllustrations such as his fanciful Opening of the Season at the North Pole depicts polar bears on ice skates, which was published in the December 1875 i

ssue of Harper's Weekly, showing amiable, fun-loving animals always ready to play games or join in adventures. Flapjacks, depicting a small bear holding a griddle while a young lady prepares an eagerly anticipated breakfast for a crowd of adult bears was used in the December 1892 issue of the same publication.

Images from Century Magazine, Harper's Weekly, Frank Leslie's Weekly, The Ladies Home Journal, Harper's Young People, Harper's Bazaar and many other publications will be on view alongside illustrated letters, an 1881 Christmas Card published by Louis B. Prang, copies of The National Elgin Watch Company's lllustrated Almanac and an extraordinary copy of Fables by George Washington Aesop with a beautifully illustrated cover. Inside, each fable has been artfully depicted by Church. (left: Frederick Stuart Church (1842-1924), Xmas 1897, Harper's Bazaar, December 1, 1897)

A New Year's Greeting from the January 1, 1889 issue of Harper's Young People shows a large stork clutching a basket in his beak while a chubby round baby smiles from inside, Christmas Fun from Harper's Weekly December 16, 1893 issue depicts a young woman being assisted by a bear in putting on her ice skates and Santa's Cake Walk from the December 17, 1898 issue of Harper's Bazaar is a scene in which Santa directs a polar bear band seated in his reindeer driven sleigh while dozens of bears dance with top hats, canes and fans. 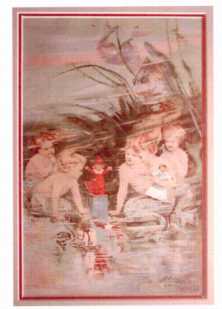 A devoted animal lover, Church became friendly with the outdoor inhabitants of a farm while he taught drawing to the family's two young daughters. He could often be found handling and posing the tame frogs from the spring house, carrying turtles up from the pond and arranging chickens and other farmyard poultry for Thanksgiving sketches. Church played catch with an elephant, watched the dance of a distressed ostrich and spent hours observing seahorses in an aquarium in order to effectively capture the character of each creature. (right: Frederick Stuart Church (1842-1924), Christmas Morning: One Hundred Fathoms Deep, Harper's Young People, December 11, 1888)

In addition to the works from the Horst Collection, an 1894 painting from the Museum's Permanent Collection, entitled, Cold Sauce with the Christmas Pudding, a gift of Mr. Robert F. Skutch of Baltimore, will also be on view along side the Century Magazine in which it appeared.

A Halloween illustration of dainty witches crouched by a cauldron under a smoke-filled sky, a Thanksgiving image of a young girl driving turkeys, a depiction of Christmas morning on the bottom of the sea as little mermaids open their gifts and polar bears dancing arm-in-arm with a lovely young woman, will create a festive and fanciful atmosphere enjoyable to all ages. 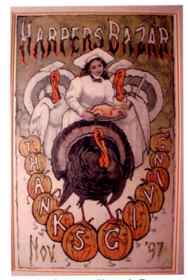 The son of a prominent lawyer and political figure, Church was born in Grand Rapids, Michigan, where he attended school until age 13. Directed by his parents toward a business career, Church worked from the age of 13 to 17 for the American Express Company in Chicago. After serving in the Civil War, he took lessons in drawing from Walter Shirlaw at the Chicago Academy of Design.

In 1870, Church moved to New York City and studied at the National Academy of Design with Lemuel Wilmarth and at the Art Students League. He had an in-depth knowledge of animal anatomy and his first allegorical compositions were produced in the mid-1870s. His illustrations were printed in numerous American periodicals such as Leslie's Weekly Illustrated Newspaper and Harper's Weekly. (left: Frederick Stuart Church (1842-1924), Thanksgiving, Harper's Bazaar, November 18, 1897)

Although he was a strong believer in academic training, Church did not visit Europe until later in his life as he felt that foreign art had little to teach Americans. Active in the Art Students League, the artist remained in New York City for the rest of his life.