Fascinated by the extensive journals of Meriwether Lewis and William Clark, photographer Greg Mac Gregor embarked on a journey in their footsteps across the United States to capture with his camera the contemporary legacy of the explorers' 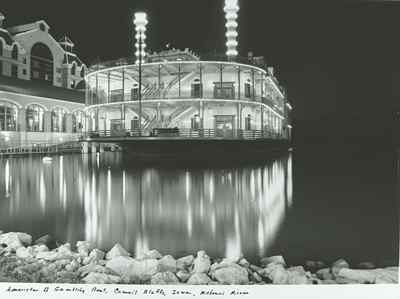 Lewis and Clark Revisited: A Trail in Modern Day, Photographs by Greg Mac Gregor is on view in the Julien Levy Gallery from December 11, 2004 - February 6, 2005. The exhibition presents sixty of the artist's black-and-white photographs of sites along the Corps of Discovery's original route, made over a six-year period from 1993-1999. Excerpts from the explorers' original writings about their encounters and impressions are included, paralleling Mac Gregor's own focus on the human presence in the landscape and his documentation of the American West's transformation during the past 200 years.

"Greg Mac Gregor's journey through eleven states does not attempt to recreate the uncharted Western landscape as it appeared to Lewis and Clark," said Katherine Ware, Curator of Photographs. "By recording the contemporary imprint of power lines, bridges and convenience stores, he presents an unflinching view of the development of the American landscape over two centuries."

Mac Gregor is professor of photography at California State University, Hayward. He received a Master of Arts in photography from San Francisco State University in 1970 and a Master of Science in physics from The South Dakota School of Mines and Technology in 1964. He has taught both photography and physics at the university level and worked as an astrophysicist. He is the author of Overland: The California Emigrant Trail of 1841­1870. and his work is in the permanent collection of over twenty major museums including The Museum of Modern Art, New York, the Los Angeles County Museum of Art, the George Eastman House and the Bibliothèque nationale de France.

The exhibition is traveling to more than fifteen cities throughout the United States as part of the nationwide commemoration of the Lewis and Clark Bicentennial. and is organized by Smith Kramer Fine Art Services and is coordinated in Philadelphia by Katherine Ware, Curator of Photographs.

The exhibition is accompanied by the book Lewis and Clark Revisited: A Photographer's Trail, by Greg Mac Gregor (2003).

Like others drawn to the story of the expedition, MacGregor found inspiration in the writings of Lewis and Clark. Their journals provided him with another lens through which to look, the lens of history, and he used their words as his guidebook to follow the human imprint on the old route. The book includes many delightful and revealing extracts from the journals. These historical texts take us back to the time of Lewis and Clark while they illuminate the world represented in MacGregor's contemporary photographs. The interplay of words and images reveals the multiple faces of the landscape and reminds us of the origins of this great story two hundred years ago. [1]

In his prologue, MacGregor observes: "Wherever a western river flows, it becomes the center for human activities" (p. xvi). His photographs bear that out. Some photographs reveal this plainly, such as the picture of a ship being loaded at the port of Longview, Washington, on the Columbia River. Others - the ones that I found most impressive and insightful - capture at once the august beauty of the natural landscape and the pervasiveness of our industrial age. One such photograph shows enormous Ryan Dam on the Missouri in the background and in the foreground an ancient rock formation darkened by the shadows of power lines. Conspicuously absent in Lewis and Clark Revisited are photographs of rivers undisturbed by humans.
Whether one sees something worth celebrating or mourning - or both - in MacGregor's photographs depends on one's perspective, but the photographs offer much to consider as we ponder the West's future. The certainty of change in the western landscape is clearly conveyed. It would be a mistake to view this change as something that has already happened. It is continuing, as MacGregor deftly reminds us. Some of the most compelling photographs are those that reveal a landscape returning to a more natural state, such as the photograph of a single bridge abutment standing in the middle of the Yellowstone River, having once supported a bridge that has long since disappeared. A photograph of an abandoned railroad track that has been converted to a pedestrian and bike trail in Missouri evinces a postindustrial mindset that has taken root in many communities and is resulting in the intentional deconstruction of the industrial landscape in order to enhance quality of life. [2]

According to Smith Kramer Fine Art Services, Lewis and Clark Revisited: A Trail in Modern Day, Photographs by Greg Mac Gregor is scheduled to tour the following venues after being exhibited at the Philadelphia Museum of Art:

Links to sources of information outside of our web site are provided only as referrals for your further consideration. Please use due diligence in judging the quality of information contained in these and all other web sites. Information from linked sources may be inaccurate or out of date. TFAO neither recommends or endorses these referenced organizations. Although TFAO includes links to other web sites, it takes no responsibility for the content or information contained on those other sites, nor exerts any editorial or other control over them. For more information on evaluating web pages see TFAO's General Resources section in Online Resources for Collectors and Students of Art History. Individual pages in this catalogue will be amended as TFAO adds content, corrects errors and reorganizes sections for improved readability. Refreshing or reloading pages enables readers to view the latest updates.

Read more articles and essays concerning this institutional source by visiting the sub-index page for the Philadelphia Museum of Art in Resource Library.

Visit the Table of Contents for Resource Library for thousands of articles and essays on American art, calendars, and much more.