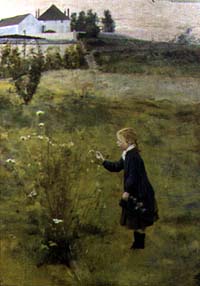 American artists flocked to Europe during the late nineteenth century and first decades of the twentieth century to study art and became immersed in the European culture. Some of these visiting painters became expatriates such as the Museum's founder, William Henry Singer, Jr., James Abbott McNeill Whistler, and Daniel Ridgway Knight. Beginning with Singer and selecting other artists from the Permanent Collection who painted overseas, as well as by borrowing from private lenders and institutions, the exhibition gives a cross section of the experience of Americans painting abroad.

Their paintings reveal the sophisticated cities, particularly Paris, Venice and Florence, as well as the beauty of the countryside. Paintings from the Iberian peninsula to the Swiss Alps and from the Rhine to the fjords of Norway, are part of the exhibition, as well as works from more exotic locales such as Africa and the Orient.

Included in the exhibition is Kenyon Cox's 1882 oil Thistledown, Henry Bacon's 1890 view of the fashionable beach resort of Etretat on the Normandy coast, and James A. M. Whistler's La Mere Gerard depicting a Parisian flower seller. Ethel Penniwell Brown is represented by The Butterfly, and Eugene Lawrence Vail's evocative evening view of Venice is part of the show, along with The Lace Makers by Ralph Wormeley Curtis, a view of Sorrento by Hezekiah Anthony Dyer, and a portrait of a Breton woman by Edwin Murray Mackay.