Visions for the Next Millenium: Wilderness Photography -- Focus on Preservation by Clyde Butcher

Bergstrom-Mahler Museum is proud to present Visions for the Next Millennium: Wilderness Photography -- Focus on Preservation, an exhibit of large format photographs by Clyde Butcher scheduled to open March 1 and run through May 2, 2004. A public reception will be held Thursday, March 18 from 5:00-8:00 in the evening. Tracey Koenig, Executive Director of Heckrodt Wetland Reserve will 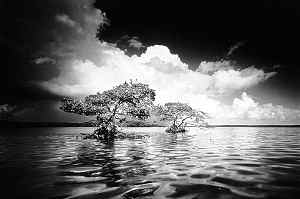 speak at 6:00 during the reception.

For more than thirty five years Butcher has been preserving on film untouched areas of landscape. The photographs exhibited range in size from 36 x 36 inches to seven feet by eight feet and chronicle some of America's most beautiful and complex ecosystems. (right: Clyde Butcher, Gaskin Bay)

Butcher's background is in architecture, and it was these early formal interests in spatial relationships that led him to the field of photography. However, it was the untimely, tragic death of his son that brought him to seek solace in nature and, in turn, nurture his passion.

"Wilderness, to me, is a spiritual necessity. When my son was killed by a drunk driver it was to the wilderness that I fled in hopes of regaining my serenity and equilibrium. The mysterious spiritual experience of being close to nature helped to restore my soul. It was during that time, I discovered the intimate beauty of nature. My experience reinforced my sense if dedication to use my art form of photography as an inspiration for others to work together to save nature's places of spiritual sanctuary for future generations."

Clyde has recently been honored with Florida's Artist Hall of Fame Award for his photographic excellence. The Sierra Club has honored Clyde with their prestigious Ansel Adams Award to recognize Clyde's use of still photography to further the cause of conservation and his contribution to the public awareness of the environment.

The show in Neenah, WI is part of a twelve city national tour over a two and a half year period, developed and managed by Smith Kramer Fine Arts Services, an exhibition tour development company in Kansas City, Missouri.

Visions for the Next Millenium: Wilderness Photography -- Focus on Preservation is organized by Clyde Butcher.

Bergstrom-Mahler Museum originated more that a century ago, in the imagination of a young girl in upstate New York. Born in 1872, Evangeline Hoystradt Bergstrom grew up in comfortable surroundings in the college town of Ithaca. It was as a young girl that her now legendary love affair with paperweights began.

As Evangeline was to recall, it all started with one of her grandmother's long lost paperweights. It was filled with tiny glass flowers, or florets, which the young Evangeline found endlessly fascinating. "That paperweight was of the millefiori type I learned later, and it amused me by the hour to try and find two similar florets. When the old house was dismantled, that was the one thing I wanted, but living a long distance away it was picked up by someone near there and never seen again."

Years later, as the wife of Neenah industrialist John Nelson Bergstrom, Evangeline happened across a similar paperweight at an antiques show in Florida. She bought it, and so began a collection that one day would form the core of the Museum that now bears the Bergstrom name.

While Evangeline Bergstrom's grand obsession with paperweights provided a primary collection for the new Museum, Mrs. Bergstrom would never have claimed that she alone was responsible for what was to become the Bergstrom-Mahler Museum. When the Museum opened in 1959 as the John Nelson Bergstrom Art Center and Museum, it represented the culmination of years of community effort.

Still, the role the Bergstroms played can hardly be minimized. There would have been no Museum without John Nelson Bergstrom's decision to bequeath their mansion to the City of Neenah along with Evangeline's collections.

As the name of the Museum reveals, another couple, Ernst and Carol Mahler, were also instrumental in its success. Ernst Mahler, an Austrian-born inventor and Kimberly-Clark executive, first became involved after John Nelson's Bergstrom's death in 1951. As head of a local citizens group, his leadership and organizational skills were crucial in turning the Bergstroms' bequests into the reality of a museum.

The Mahler's involvement intensified after the Museum opened, with both Ernst and Carol serving as president of the Museum Foundation. But it is for other reason -- the donation of their splendid Germanic glass collection -- that the Mahlers are remembered today.

As art scholar and glass collector Paul Hollister one noted, the Bergstrom and Mahler Collections taken together are what makes the Museum special. "The two great strengths of the Bergstrom -- glass paperweights and related objects, and Germanic glass -- form a combination unknown to me in any other museum, though other museums, of course, have some of each. It is this specialized combination that sets Bergstrom apart"

Today, with nearly 3,000 pieces, Bergstrom-Mahler Museum is known worldwide for its Permanent Collections of glass. But it would be a mistake to think of the Museum solely in terms of paperweights and Germanic glass

In addition to its Collection resources, the Museum is also a community arts center. Its educational offerings includes art classes and workshops, lectures and demonstration programs related to its Permanent Collections and temporary exhibitions. The Museum's school outreach program reaches more the 2,500 third graders each year. In addition, the Museum is committed to presenting "bigger, bolder, and better" temporary exhibitions -- exhibitions that are enhanced by lectures, tours, demonstrations, and special events.

Expanded in 1965,1986, and again in 1997 to meet the needs of its growing public, the Museum now greets more than 25,000 visitors each year. As Bergstrom-Mahler Museum continues to grow, it has proudly taken on its mission as a responsive community arts center, and as a steward of a world-renowned paperweight collection.

Visit the Table of Contents for Resource Library Magazine for thousands of articles and essays on American art, calendars, and much more.